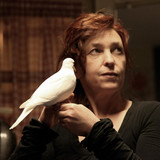 Christine Ott is a french composer, pianist and multi-instrumentalist, also known to be an ondes Martenot virtuoso. She was a student and friend of Jeanne Loriod, performed with numerous orchestras the repertory of Olivier Messiaen, Arthur Honegger or Edgard Varèse. She was part of the Yann Tiersen band for ten years, regularly collaborates with Tindersticks on the Claire Denis movie soundtracks. She has published different solo albums between contemporary classical and electronic music, or also with her side-project Snowdrops. She composed for films as for Manta Ray by Phuttiphong Aroonpheng in 2018 (Orizzonti Best Film at Venice Film Festival).

In 2020, she released two albums ; "Chimères (pour Ondes Martenot)" on NAHAL Recordings (curated by Mondkopf and Frederic D. Oberland from Oiseaux-Tempête), an unprecedented album entirely conceived with Ondes Martenot. And with Snowdrops, "Volutes" on Injazero Records (in the The Guardian's 10 best contemporary music albums of 2020). In 2021, she's back to Gizeh Records for her fourth solo album "Time to Die"... Sylvie Keller, [raintrain press]