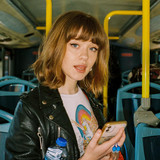 West Sussex-born Maisie Peters has an innate gift for storytelling, crafting relatable, diary-entry songs which have racked up over half a billion streams worldwide. Having won over the likes of Taylor Swift, Phoebe Bridgers and Sam Smith, she has progressed from busking on the streets of Brighton to selling out London’s Shepherd’s Bush Empire and headlining her own U.S. tour. Recently, Maisie became one of the youngest musicians in history to write and curate a soundtrack for the critically acclaimed second season of popular TV show, ‘Trying’.