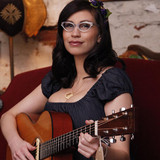 Queer country trailblazers Karen & the Sorrows have been featured in Billboard, WNYC’s The Takeaway, and Rolling Stone, who described them as “Dolly Parton fronting Tom Petty’s Heartbreakers.” Noisey called the band “exactly what country music needs right now.” For the last eight years, they have also been at the heart of a growing queer country community, running the Gay Ole Opry Festival and the Queer Country Quarterly, and creating space for people who love country music even if country music doesn’t always love them back. With the Sorrows’ third album, Guaranteed Broken Heart, which will be released on October 18th, singer-songwriter Karen Pittelman has struck off in new directions. While many of the songs still center around the dark, country-rock twang that Pittelman loves, she also dove more deeply into both ‘90s country and string-band inspired sounds.