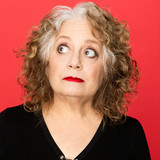 Christmas Facts about JUDY NAZEMETZ. Judy trained Santa Clauses. Hired them, fired them, taught them how to dress, speak, hold babies, and put on deodorant. She lived, breathed and dreamed Santa Claus. But when she moved from NYC to SoCal, she experienced a bit of culture shock and wrote “A Southern California Christmas Carol”.

But, she adapted, singing traditional carols with Jim Carrey on The Tonight Show with Jay Leno and her original carols in a couple dozen Fred Willard comedy shows. In Hollywood’s annual Santa-thon comedy evenings, Judy sang her Xmas tunes and had audiences rolling on the floor as her alter ego, Smokey Lady, held forth about Xmas. Judy's an improv-comedy gal. She worked with Chicago City Limits in NYC and LATheatresports and Wrought Irony in LA. She creates songs on-the-spot from audience suggestions. A song humorist and genre-bending singer-songwriter who brings the funny to everything she writes, Judy's albums BALANCING ACT and VARIETY PAK have been played worldwide, from Australia, the US and Europe to Skopje, Macedonia. “The Hamster Didn’t Die Today,” her song about the trials and tribulations of hamster ownership, won Best Blues Song of the Year on SevernFM’s Blue Hour with Dr. Wart Hoover. Combine Judy's comedy and her love of Santa and you get upbeat, fun holiday songs. (And, she tap dances on “Tabletop Christmas.”) Judy's newest album "Meat Bird in Beigeville" drops Jan. 2021.