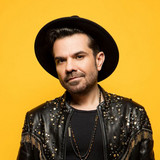 One of the most prominent names in Turkish pop music, Kenan Doğulu's professional career took off with his debut album in 1993. Since then, he has become a singer-songwriter, producer, philanthropist and occasional actor. His career highlights include 14 studio albums, 5 singles, 47 music videos, countless awards for best album, best song, best music video, and thousands of concerts that attracted hundreds of thousands of people. Kenan Doğulu's albums sold more than 13 million copies including “Festival”, which became the best-selling album of the year in 2006 with its first single “Çakkıdı” holding the record of Turkey's most downloaded song of all time. His other accolades include more than a dozen number-one songs, albums and videos. His popularity landed him appearances in successful advertising campaigns. Doğulu composed and performed the Turkish entry for 2007 Eurovision Song Contest “Shake It Up Shekerim”, finishing in fourth place. In his career spanning more than two decades, Doğulu gained further attention for his collaborations with other artists and for composing songs in different genres, including a film score for "Unutursam Fısılda," for which he won a SİYAD award and a jazz album "İhtimaller". As a producer, he has helped several musicians to launch their careers, even delving into hip hop along the way. He was the voice of several animation movie characters and took part in hundreds of charities, focusing primarily on children's education.