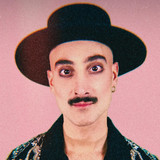 With his distinctive style and powerhouse pop vision, London-based Cypriot singer Adam Prince King has splashed on to the scene with unapologetic impact, delivering sonic and visual delights that dovetail with his avant-garde creativity. From cutting his teeth training in the performing arts on the London theatre scene, to studying at The Academy of Contemporary Music to achieve a degree in Music Production, Adam has always kept his focus on honing his unique sound and meticulous creative vision, which is seen across his ever-expanding discography. Adam’s debut single Flamingo’s reached 100,000 views on YouTube within its first weeks of release, resulting in his signing to West One Music Group’s commercial offshoot, Little Assembly. He has garnered global support from curators and taste makers who unanimously praise his flare and catchy, lyrical song writing. With Adam’s hotly anticipated newest venture ‘Music Man’ set for release in February 2021, his critics and fans alike are chomping at the bit to hear what he has in store next.