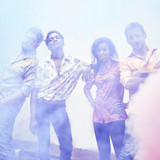 Lu-Fuki is a four-piece alternative funk/pop band based in Johannesburg, South Africa. The word "lu-fuki" is of Ki-Kongo origins meaning “bad body odour” and was associated with all things funky. After a four year hiatus spread across the world, the band members reunited in January 2018 with revived motivation and creativity. Lu-Fuki made their debut in September 2011, placing 1st in the Grahamstown Battle of the Bands. From there, Lu-Fuki spilled into the local music scene. They recorded their debut EP "Bad Body Odour", toured nationally, won local and national competitions, performed two years running during the Grahamstown National Arts Festival, and opened the stage for prolific local artists like Jack Parow. Since their 2018 revival Lu-Fuki has secured sets at various events, most notably at the globally recognised Sofar Sounds in Johannesburg, The Music Imbizo in Durban and the NYE Smoking Dragon Festival in the Drakensburg. Lu-Fuki’s lead single “Love You at Pace” (October 12 2018) and their second EP “Coalesce” (November 2 2018) are embodiments of their reunification, the release of which was made possible by their successful crowdfunding campaign. Lu-Fuki’s sound is mainly influenced by the Red Hot Chili Peppers, Incubus and Kings of Leon. Each band member infuses their unique style into the music, making Lu-Fuki a fusion of the of funk, alternative, reggae and pop genres.