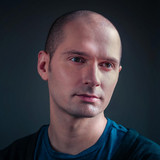 Marcio Novelli’s The Reimagining, Vol. 1 seems simple enough: seven tracks from across the celebrated alt pop rock artist’s discography, reimagined in acoustic form. But don’t be fooled – this EP is much more than just a collection of bare-bones renditions with an acoustic guitar. Novelli has breathed new life into the songs, pulling back the blazing electric guitars and pounding drums of their original arrangements to reveal the intimacy and melancholy that lays beneath.   As he does on all of his releases, Novelli wrote every song and performed every instrument, even embracing the challenge of arranging a string trio on each track for the first time. And as his musical journey over the years has taken him from solo acoustic performances to an expansive full band sound, this EP sees him embracing his roots while reinvigorating his back catalogue. It’s a nod to the past while looking steadily forward.   The EP serves as the perfect bridge between his debut album and upcoming sophomore record and it’s clear that listeners are hungry for new music – the new album’s crowdfunding campaign hit 100% in just three days. The Reimagining, Vol. 1 is both a celebration of where Novelli has been and a taste of where he’s going next – as well as a reminder that wherever that road takes him, passionate emotionally honest music will always be the destination.  —  Marcio Novelli also releases music under his electronic dark alt rock side project, Midnight Soundtrack.