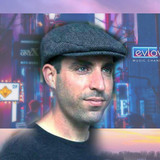 Evlov (aka Robert Alexander) is an Audio Alchemist who is based out of Southern California. He is the creator and founder of LifeRhythms –

a wellness business that offers private virtual sessions with personalized music designed for your greater wellbeing. Evlov's ambient and cinematic soundscapes have available for licensing and utilized for podcasts, radio airplay and used for DJ sets. Robert also creates audio content has been used by coaches, healers, hypnotherapists, yoga instructors and more. Influenced by many genres of 20th Century music - Evlov enjoys 'genre bending' luscious frequencies and is highly motivated and inspired by acts such as Bonobo, Massive Attack, Tycho, The Starseeds, Aphex Twin, Christopher Willits, DJ Shadow, Ben Harper, R.E.M. and many other artists of the 20th Century! Evlov produces independent recordings and is heavily favored in various communities throughout the planet. His first two releases "21st Century Flow" and "Patience Tolerance & Love" is released independently. His album "Essence" is Released on BassStar Records and "Modern Ritual" is released on OvniMoon Records. Through his music and his ability to work with others, Robert encourages, motivates and inspires others and he desires to motivate, empower and inspire you as well. For more info - check out what he is up to at www.liferhythms.us - www.soundcloud.com/evlov - evlov.bandcamp.com