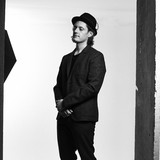 Sam Brookes has been down into the depths, only to re-emerge with a firm fixation on the beauty and light that can be found in the everyday. He’s been pushed through grief, loss, and heartbreak, using music as a tool to piece himself back together, and to find a forward path. But it hasn’t always been easy. 2014’s ‘Kairos’ was named one of the year’s standout recordings by the Independent, with Sunday Times acclaiming Sam as a Breaking Act. Meanwhile his soaring, multi-octave voice – often compared to Tim Buckley – stands as one of the most expressive instruments in British music. Folk-meets-jazz twisting and turning at the outer reaches of the singer-songwriter role, his music is confessional in the most explicit way – and new album ‘Black Feathers’ is as honest as it gets. Sam lost his father, who had long been an anchor in his life. Shortly after this, a long-term relationship unravelled, before a close friend died. He took time out, relocating to the calmer climes of Bristol before finding renewed focus by returning to the bare essentials of his art – clutching his guitar close, and using that glorious voice. A daring, riveting experience, ‘Black Feathers’ is a stunning body of work. “I feel like I’m much calmer around who I am, what art I’m making, and what the future may or may not hold,” he says. It’s this emotional transcendence that makes Sam Brookes’ work so rewarding, so valuable. As a listener, you come out the other side cleaned, enriched.