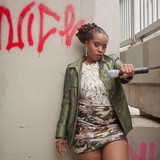 Independent artist, Mel Dubé brings an attitude to every word that she sings using her powerful vocals fused in various sounds tailored to melodic neosoul/reggae and pop music. The saucy performer was recently recognized in her first feature acting role in the Spotify Family Premium campaign. Mel connects with her fans through an expressive vibe of lyrical content which heals your ears in a seductive way. Dubé's early musical training was rooted in Music theatre, performing with choirs, she spent several years performing with live bands and open mic jam sessions. Her humble beginnings as background singer for various reggae artists such as J.C Lodge, Lenn Hammond, Steele, Richie Stephens and for local bands in Toronto gave her additional insight needed to groom her vocal abilities. She began taking on more of interest to write and produce her own material and was awarded a demo grant to produce her first single, "Bring it". Years later she grew even more stronger as a live performer and recording artist, and released another single “Extra Side” was chosen to be featured on Music 311 – a new phone system initiative managed by the City of Toronto that spotlighted local indie artists and connected them with millions of listeners in her hometown.