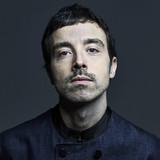 Raised around Italy, mainly in the south, Diodato absorbed the atmospheres of those profound contrasts early on. Echoes of dreamy and rarefied visions, but earthly and sanguine at once, forcefully return in his music. He moved to Rome to study his other great passion, cinema, and he artistically trained with hundreds of gigs that took him throughout Italy with his record debut E forse sono pazzo in 2013. His journey at the Sanremo Festival started in 2014 with "Babilonia" cited by Mina on VanityFair as the best song racing; it won an MTVMusicAward and the Fabrizio De André award. Signed the record deal with Carosello Records, in 2017 he released Cosa siamo diventati. Featuring his friend and colleague Roy Paci, Adesso became one of the revelations of the 2018 Sanremo Festival, taking him on tour around Europe. His consecration came at the 70th edition of Sanremo Festival, when he won with Fai rumore, along with the critics' prize MIA MARTINI, the radio and TV prize LUCIO DALLA and the LUNEZIA prize. On top of national charts, certified platinum, the song got him an important international resonance after a performance at the Arena of Verona in May 2020 for EUROPE SHINE A LIGHT with over 60M views. He also won the David di Donatello for Best Original Song with Che vita meravigliosa featured in the soundtrack of LA DEA FORTUNA, a movie by the award-winning Ferzan Ozpetek. He is the only solo artist in the history of Italian music to have won at Sanremo and a David di Donatello.