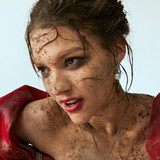 Her first single in 3 years, "Mood Swings" finds Tove Styrke back in top form and is just a taste of what's to come in 2021. Exploring the complexity of human identity and her struggles with mental health and self-acceptance, Tove describes, "‘Mood swings’ is insane. It’s paying tribute to my best and worst sides. I really hate myself sometimes. But I’m trying really hard not to. These past three years I’ve been through depression, fell hard in love, survived a Swedish music reality TV-show, I got a car, I got stuck with millennial blues, I feel like an adult sometimes, I feel like I did as a child. I feel kinda free." "Mood Swings" follows Tove Styrke's 2018 album, Sway, a project which solidified her place among the top rising forward-thinking pop artists. The album was bolstered by iconic tracks such as "Sway," "Mistakes," and fan-favorite, "Say My Name," which Rolling Stone named to its #11 spot on its 'Top Songs of 2017' list. The album has since garnered 118M+ combined streams, drawing widespread critical praise from outlets including Pitchfork (7.5 review), The FADER (Gen F), NME (5 stars), as well as support from Zane Lowe/Apple Music and BBC Radio 1. A platinum-selling, Grammy-nominated, and national radio P3 Guld 'Pop Artist of the Year' recipient in her native Sweden, Tove Styrke has been on a meteoric rise since the release of her 2015 album, Kiddo, led by singles, "Borderline," "Ego" and "Number One." Since then, Tove has embarked on multiple headline tours.