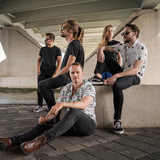 El Fatso sounds like a hot and messy one night stand between Mr. Stonerrock and Ms. Pop. Falsetto vocals, crooked guitars and sweaty grooves form the ingredients for their signature sound, which they call ''Rock 'n' Roffa''. Their songs demand you to move that ol' body of yours around, in whatever way possible and absolutely own it while doing so. After it! Starting out as a three-piece band in 2016, El Fatso won the audience award of Eendracht Festival 7.0 while playing their first gig. In 2017 the band released their 'Pro Bono Mixtape', containing the singles 'Rodion' and 'Fatsination'. ‘Rodion’ was the most listened track on Reddit (and featured on multiple playlists, e.g.

r/ListenToThis). The band expanded when