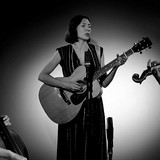 In music, one of the most transformative experiences a woman can have is also an unspoken artistic taboo: Have a baby if you must. But for goodness’ sake, don’t write songs about it. Critically acclaimed singer-songwriter Alela Diane has a problem with that. “This music is about motherhood,” Alela says of her highly anticipated fifth album Cusp. “Even just by saying that, it feels like people will write you off. It’s like you’ve suddenly lost the charm of being youthful and even attainable––you’ve been commoditized as available. There is not a big place in the music industry for 30-something women with kids making music.” She laughs as she pauses, then adds, “Maybe we can create that space.” If anyone can carve out needed new territory, it’s Alela. Cusp may be a thematic departure for the Portland, Oregon-based artist, but the Argus-eyed writing and clear voice that have long-since wowed Pitchfork, NME, Paste, and other early adopters throughout Europe and elsewhere have never been stronger.