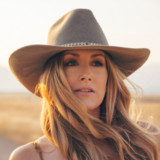 Montana native Stephanie Quayle is highlighting genuine connection and finding love and beauty in the simple things. Recorded almost entirely virtually during COVID-19, the country music singer-songwriter's latest offerings define a new era in Quayle’s musical journey. With a strong dose of Western, an emphasis on baritone guitar and a frisky put-it-out there candor, Quayle leans straight into what’s on her mind. Paired with Alex Kline, award-winning songwriter and one of the most notable female producers in Nashville, the two have expanded upon Quayle’s Big Sky Country roots in this collection of songs that cements her place in country music as an artist who authentically carries the genre’s roots into the contemporary landscape of today. Rolling Stone Country named her “An Artist You Need To Know,” CMT tapped Quayle as part of their “Next Women Of Country” franchise, The Kelly Clarkson Show featured Quayle as a performer and guest, her last three singles garnered over 100 million audience impressions at country radio, and the Grand Ole Opry has hosted the get-it-done artist multiple times. Cited by Billboard for her “captivating story-telling,” Quayle serves a powerful dose of self-propulsion tempered with a dollop of “go-girl” affirmation and truth-telling.