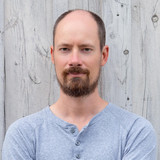 Jeff Kinder’s classically trained piano background blends beautifully into his unique, contemplative and heartfelt piano compositions. The Northern Ohio-based musician’s use of the piano sound is emphasized by the simple melodies and epic themes that make up his releases. A film-music inspired focus is clear, from his writing and performing style to his creating a powerful and moving soundscape by the use of strings.