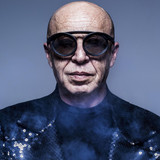 Rami Fortis is considered the forerunner of Israeli punk, although this has more to do with his D.I.Y. aesthetic, protest lyrics, and on-stage antics than his musical legacy. His era-defining debut album, Plonter, was released in 1978, yet was not immediately recognized for its significance. In fact, it sold poorly. Only years later, after achieving mild success in Europe as part of the post-punk group Minimal Compact, and returning for a successful solo career in 1988, did Fortis begin to be considered an esteemed rocker. He subsequently released critically acclaimed albums both as a solo artist and as member of Fortisakharof, an on-again, off-again duo with pal Berry Sakharof.

Fortis was a music lover who sang and played guitar all his life. In one interview he talked about growing up listening to Top 40 radio in English in order to escape the musical culture war going on at home, with his Italian grandmother listening to Giuseppe Verdi while his Iraqi grandmother listened to Umm Kulthum. He dared to dream of making music a profession only after undergoing two major experiences. The first was his military service (within the air-defense network of the Israeli Defense Force during the 1973 Arab-Israeli war), which left him with post-war anxiety. The second was the onslaught of British punk, which made its sonic way down the Mediterranean. Fortis spent some time in the early '70s in underground rock bands and got a job as the lighting assistant in rock band Tamouz's tour of 1975. Once, during an intermission in that tour, a bandmember called Fortis to go on-stage. Tamouz's audience was then inflicted with the wild mannerisms and feverish delivery of his song "Incubator." This was so well-received, the ritual repeated itself throughout the tour. A fellow crew member, Rafi Maloul, was impressed enough to finance Fortis' debut album himself. Fortis released his seminal album Plonter (Tangle) in January 1978 on CBS Records. The producer was ex-Jericho Jones guitarist Haim Romano, a well-known figure in the music business who played on Israel's first rock albums with Arik Einstein and Shalom Hanoch eight years previously. Fortis would later recall how he was so intimidated of singing, Romano had to lead him to the studio microphone and keep him from dashing out. Plonter was vastly different than anything else on the radio at the time, namely pop, disco, and quiet ballads with squeaky-clean lyrics. It was considered one of the most daring (and noisy) major-label albums of the time. With songs like "This Generation Is Pitiful" and "Get Off My TV Screen," Fortis cried out against the establishment and against the war's aftermath: drugs, death, medical experiments, and soul searching. Lines like "you're on junk all day long" and "my tormented body knows no morals" painted the picture of his disaffected generation, lacking the ideals of their parents and mistrusting them. Fortis performed "Get Off My TV Screen" twice on Israel's (then) only TV channel, with tight-lipped presenters introducing him as a "punk rocker." The attitude may have been punky, but musically it was mainly garage rock, with bouts of reggae ("Sun, We Are Expecting You"), glam rock ("She Ruined Everybody"), Frampton-esque talk box ("Teach Me Tonight"), and even violins and be-bop saxophones. Later, Fortis would admit to being influenced by the American version of garage and proto-punk (mentioning Jonathan Richman & the Modern Lovers, Iggy & the Stooges, and Television). Without proper rock venues to perform in, Fortis and his band supported the album by playing in cinemas. Some listeners were impressed, most were not: record buyers as well as rock critics. Fortis was disappointed by the meager welcome and decided to venture to the Netherlands and tentatively join some friends (including Plonter lyricist Sami Birnbach and guitarist Berry Sakharof) starting a new wave band. During the beginning of the '80s he wavered between Israel and Europe, importing the new, metallic sounds he heard abroad to performances in budding post-punk clubs in Tel Aviv. In 1984 he decided to permanently join his friends' band in Brussels, now named Minimal Compact, incorporating Middle Eastern elements into their dark new wave sound. The band received recognition in the indie music scene, working with Tuxedomoon and recording a session for BBC's John Peel. For four years they toured Europe, until disbanding in 1988. It was during one of these tours that Fortis and Sakharof began writing songs in Hebrew, which would result in Fortis' comeback album, Sipurim Me'hakufsa (Tales from the Box). But these songs were just a distraction: the two were actually planning on starting a new European band, called Foreign Affair, incorporating rock, dance music, and Arab music. And yet, when Fortis returned to perform in Israel, he felt the time was right for a Hebrew album. Indeed, Sipurim Me'hakufsa, produced by Sakharof, came out to an anticipating audience and every single released from the album became a hit. All songs on the album were written by Sakharof and Fortis, with one cover version, Lee Hazlewood's "Some Velvet Morning." 1990 saw the release of another album, titled 1900?, this time credited equally to Fortis and Sakharof. Sakharof also sang lead in two songs. This album helped Fortis cross over from indie to rock. Two years later, after releasing Lehitraot Behalomotay (See You in My Dreams), Fortis and Sakharof ended their creative relationship, leaving Sakharof to his increasingly successful solo career and leaving Fortis to forge new partnerships, including one with Shlomi Bracha, the creative force behind the rock band Mashina. Fortis released four critically acclaimed albums, but could not re-create the commercial success of yore. In 2005, Sakharof, now a bona fide rock star, and Fortis announced they were re-creating the "Fortisakharof" brand that lay dormant for 13 years. They released a single, "News from the Moon," and began touring together. The resulting album, Al Hamishmeret (On Guard), was considered a tour de force, with strong lyrics protesting against contemporary apathy and shallowness and with melodies that, not unlike Foreign Affair's songs, match rock with Eastern sounds and Israeli folk music. In 2008, Fortis celebrated the 30th anniversary of the release of Plonter. This time around, the album received full credit as a milestone, which helped open Israeli music to underground sounds and protesting lyrics. In January, Fortis returned to TV and performed "Get Off My TV Screen" on one of the many Israeli channels. The presenter was the same one as 30 years ago, only this time he was pogoing gleefully to Fortis' anthem. ~ Ayelet Yagil, Rovi