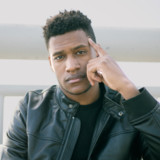 Don Esco (born Shemarr Lavell Taylor) is a Rap artist, songwriter, record executive, originally from Aurora, Illinois and currently based in San Diego, California. Shemarr began displaying an avid curiosity for music at only six years old when he would come up with choreographies for his favorite records. Growing up, he quotes Nas as his top influence, having as a matter of fact, incorporated the second known moniker of the rapper, Escobar, into his own stage name: Esco. Shemarr got introduced to professional writing, recording, and live performing when he was one of the 5 featured acts on GreenLife Entertainment from 2012 to 2014. Albeit contemplating the officialization of his own record label, he first prioritized joining the Military in 2015 and later on, registered Lost Records Entertainment in 2018. Don Esco often travels across states having built a fanbase ranging from back home in Illinois, to Houston, Arizona, and Florida. The rap artist’s music is a high-class juxtaposition of emotive lyrics fused with catchy R&B and Hip Hop synth sounds, asserting the need for always evolving as human beings and learning from other people’s mistakes.