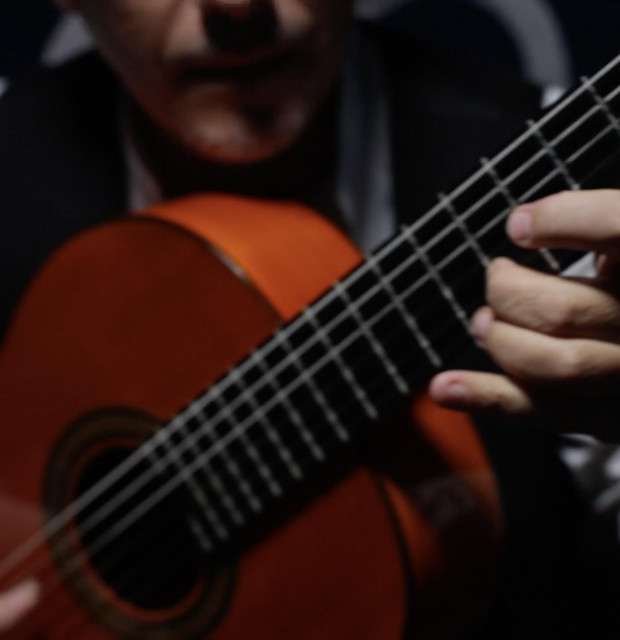 Pedro Javier González, a native of Barcelona, tempered and precise, is one of the most versatile guitarists and composers in Spain. The flamenco essence of Pedro Javier was directly influenced by the masters Juan Trilla and Antonio Francisco Serra. Albert Cubero and Sean Levit were equally important influences from the fields of jazz and improvisation. He has lent his quality to a wide variety of groups and artists from a broad spectrum of musical styles and genres: Toti Soler, Feliu Gasull, Victoria de los Ángeles, El último de la fila, Joan Manuel Serrat, Lluís Llach, Maria del Mar Bonet, Manolo García, Paco Ortega, Mónica Molina, Angelo Branduardi, Roberto Alagna… He has headlined festivals with musics like Paco de Lucía, BB King, John Mclaughlin, Pat Metheny, Keziah Jones, John Williams, Tommy Emmanuel and Tomatito, amongst others. He has released eleven records along his personal artistic journey. Half the world has enjoyed his elegant reinterpretation of the great masters of flamenco guitar and his arrangements of rock classics (his version of Sultans of Swing has been viewed about one and a half million times on Youtube). Pedro Javier González is a reference point for other guitarists. Russia, the United States, the United Kingdom and France have all witnessed his mastery as a soloist, accompanied by the Russian National Orchestra, the Plainfield Symphony Orchestra or the Orchestra of the Teatro Olímpico of Vicenza. In other musical ventures, we have enjoyed listening to him playing as part of a duet with the double-bass player Horacio Fumero, as part of a very well regarded flamenco-fusion trio with Roger Blavia and Toni Terré, and in a quartet with Raúl Rodríguez, Trilok Gurtu and Guillem Aguilar. Pedro Javier González’ musicality is varied, succinct, sensitive, demanding and disciplined. It is, essentially, a statement of good taste.