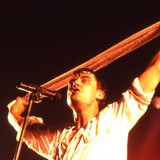 Delivering raucous hard rock in the tradition of contemporaries like AC/DC and Rose Tattoo, the Angels are among the longest-lasting and most beloved bands ever to emerge from the Australian pub circuit. Their roots date back to 1973, when singer Doc Neeson and guitarist Rick Brewster first teamed up at university in an eccentric acoustic covers group dubbed the Moonshine Jug and String Band; by the following year they had begun adopting a more straightforward and electric approach, rechristening themselves the Keystone Angels in the process. Soon abbreviated to simply the Angels, their original lineup consisted of Neeson (nicknamed the "Mad Irishman" in honor of his crazed behavior on- and off-stage) and Brewster, along with the latter's brother John on guitar and drummer Graham "Buzz Throckman" Bidstrup. In 1976, the Angels were discovered by AC/DC's Angus Young and Bon Scott, and soon entered the studio to record their debut single, "Am I Ever Gonna See Your Face Again," a major hit. With the addition of bassist Chris Bailey (not to be confused with the Saints' frontman), a tour opening for AC/DC followed, and in 1977, the Angels' eponymously titled debut LP appeared to enormous success. A second album, Face to Face, appeared in 1978 and preceded a national headlining tour; after 1979's No Exit became an even bigger hit, the group toured the U.S. and Canada; they renamed themselves Angel City in the Northern Hemisphere to avoid confusion with the glam band Angel. (To further complicate matters, a handful of releases later appeared credited to "the Angels from Angel City," the constant fluctuations no doubt contributing to their lack of success overseas.) After just three LPs, the Angels issued their first Greatest Hits collection in 1979; with their next studio album, 1980's moody Darkroom, they scored their first Australian number one hit, "No Secrets." The record also featured the track "Face the Day," later covered by Great White. At the end of the year, the Angels headlined a free concert at the Sydney Opera House that ended in rioting, prompting a government ban on outdoor concerts. Undaunted, the Angels opened in America for the Kinks, then returned home to begin work on their next album, Night Attack, their first outing with new drummer Brent Eccles. A subsequent tour exchanged Bailey for bassist Jim Hilbun, and was followed in 1983 by the odd, experimental Watch the Red. Two Minute Warning -- a concept record exploring nuclear devastation -- recorded in Los Angeles and issued a year later. Upon returning to Australia, founding member John Brewster exited, and was replaced by ex-Skyhooks guitarist Bob Spencer. Howling followed in 1986, launching the hit singles "Don't Waste My Time" and "Nature of the Beast." In support of the record, the Angels mounted a 16-month tour that yielded the double-concert LP Liveline in 1988. With new bassist James Morley, they next traveled to Memphis to record 1990's chart-topping Beyond Salvation, which notched four Top Ten singles: "Let the Night Roll On," "Back Street Pick-Up," "Rhythm Rude Girl," and "Dogs Are Talking." After 1991's Red Back Fever, both Spencer and Morley departed for solo careers late the next year, opening the door for the return of Hilbun and John Brewster. However, record company problems kept the Angels from recording new material for several years; finally, in 1996, they issued their comeback single, "Call That Living," which returned them to the Top Ten. Skin & Bone followed in 1998. The group disbanded at the close of the '90s following Doc Neeson's injury in a car accident; however, Neeson joined a re-formed Angels in the spring of 2008, and the reunited group played a series of shows during the summer of that year. Neeson left the band again in 2011 to pursue a solo career and was replaced by Dave Gleeson, former lead singer of the Screaming Jets, a group who had toured with the Angels in 1991. His debut album with the group came in 2012 when Take It to the Streets arrived featuring the single "Waiting for the Sun." The band marked their 40th anniversary by releasing the album Talk the Talk in 2014. ~ Jason Ankeny, Rovi