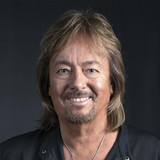 Chris Norman first found fame fronting huge 70’s hit band Smokie. In 1986, Chris left the band and started his successful solo career. He became a massive hit throughout Europe, selling millions of records worldwide Chris’s early musical influences were Elvis Presley, Little Richard, Buddy Holly & Lonnie Donegan. And later the 60’s beat groups, in particular The Beatles, were a huge influence on Chris. He formed a band at school and played all over the UK in the late 60s and early seventies. By 1974 they became ‘Smokie’. They had a string of hit singles and albums and Chris also made a duet with Suzi Quatro, “Stumblin’ In” which gave him his first taste of success outside the group. Chris’s solo career took off in 1986 with the song, ‘Midnight Lady’. Since then he has recorded over 20 solo albums and with his live band has toured extensively all over the world. This year he will release a brand-new album called ‘Just A Man’, which he has written and recorded with his old producer and friend Mike Chapman. Chris says, “this new album has got the best selection of songs I have had on an album for a very long time, and I am very excited about it”.