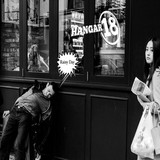 Hangar 18 were originally formed by drummer Paul Marshall in 1996. Hangar 18 went onto achieve international success and toured with ‘Silverchair’, ‘Collective Soul’, ‘No Doubt’ (Gwen Stefani), ‘Ocean Colour Scene’, ‘Grace Jones’, ‘Everclear’ and more. Hangar 18 disbanded in 1999. In 2017 after a 18 year hiatus Paul reformed Hangar 18 and went onto recruit Red Dela Pena on vocals, LC Reklamo on guitar and Malcolm Foster on the bass completing the Hangar 18 line up. Malcolm is best known for his time performing and recording with The Pretenders and Simple Minds. So Paul and Malcolm are “the veterans” in the band, working for many years in the music industry, while Red & LC are the new blood. Paul says “my idea was to form a “male” version of Garbage, comprising of a couple of established music industry“veterans” with some new blood at the helm, similar to what Butch Vig and the guys did with Shelly Manson from Garbage”.  With their unique blend of backgrounds cultures and experiences combined forms the fabric of Hangar 18. The new album is being produced by legendary UK producer Steve James (The Sex Pistols, The Jam, Shirley Bassey, Vera Lynne and more).

Hangar 18’s new album ‘Terraforming California’ is currently on hold due to COVID19 just as the band were about to release their new single from the album entitled “Say It To Me”. UK music reviewer JONATHAN ROBINSON wrote “Say It To Me, is soulful indie pop at its most recognisable, the track is achingly catchy”.