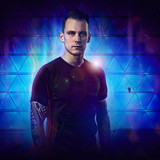 DJ Pulse (Jaimy Ernste) started spinning the wheels of steel in 2005 - he was introduced to the harder styles by his brother, and from that point, his 12 year love affair began. Infatuation turned into willing participation, and soon after this introduction, Jaimy purchased his first set of decks. His obsessive interest in the art helped him master Dj’ing skills, and in the process, DJ Pulse was born! Through a network of friends, he was introduced to several organisations, and he was lucky enough to be given the chance to showcase his skills. His energetic sets and mixing precision helped him gain attention from his peers and the public, and soon after he was able to take his DJ career to the next level. During the start of his career, Pulse has teamed up with B-front and performed LIVE under the cult alias of 2-Sidez. The two of them have had great success in the past, and with future releases planned, the future is bright for 2-Sidez. DJ Pulse is just getting warmed up, and with new solo productions on the way, the sky is the limit for this talented young man.