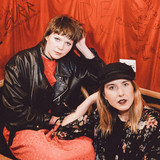 After releasing their critically acclaimed and self-produced album In My Head in 2016, Berliner 20- somethings/best buds Laura Lee and Andreya Casablanca have taken the world by storm. Their jingly rock'n'roll kick in the face live shows have seen them performing at Eurosonic, SXSW and The Great Escape, selling out shows in the UK and Germany and playing a multitude of festivals including Dot2Dot, Latitude, Dockville and many others. 2017 started with Gurr being championed by BBC Radio1 host Huw Stephens and Stereogum editor-in-chief Scott Lapatine with the band being booked to record a BBC Radio1 session at the Maida Vale Studios and being in the Stereogum top 10 singles of 2016. Gurr are now working on their new record with producer Matthew Molnar (Sunflower Bean), the former guitar player from Friends, and are about to embark on a European festival tour. "Fizzing joy of indie as it used to be" − The Guardian