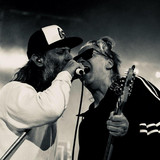 British guitarist Andy Taylor rose to staggering heights of fame with Duran Duran in the mid-'80s. The son of a small-village fisherman, Taylor taught himself guitar, bass, and drums and began playing professionally at age 13. He'd already gigged with several bands (even releasing an A&M single, "Teenage Girls," with the group Motorway) when he answered a Melody Maker ad for a "live-wire guitarist" and hopped a train to Birmingham to audition for Duran Duran (Nick Rhodes, John Taylor, Roger Taylor, and ultimately Simon LeBon). The band's phenomenal video-fueled success shot Taylor and the other members into the teen heartthrob stratosphere. Taylor married Tracey Wilson, a hair stylist who had worked with the fashionable fivesome, and opened a wine bar in Whitely Bay named Rio. Andy and John Taylor (no relation) enlisted Robert Palmer and Tony Thompson in the successful but short-term side project the Power Station. Taylor then left Duran Duran in 1985 amongst acrimonious words. With money to burn, he hauled Sex PistolSteve Jones along for his solo inaugural, Thunder, which quickly fell from the charts. Taylor contributed to the American Anthem and Tequila Sunrise soundtracks and toured the U.S. Taylor worked again with Robert Palmer and produced Rod Stewart. He also collaborated with the British band Thunder on Back Street Symphony and Laughing on Judgement Day. Taylor's second solo offering, Dangerous, dropped in 1990 and complied his renditions of heavy '70s classics like "Live Wire" and "Space Station No. 5." Taylor rejoined the Power Station for a second outing, Living in Fear, followed by a tour. At the end of the century, Taylor was still recording and performing with Thunder's Luke Morley. ~ Doug Stone, Rovi