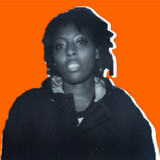 Amaroun is the latest project from multi-talented songwriter Jay Brown, existing at the sonic crossroads where Erykah Badu, Eels, PJ Harvey and Feist meet. Songs about coming out, moving up and not being kept down, Amaroun creates a truly unique form of kaleidoscopic pop music for the 21st century.   Jay's latest project is the vehicle for a widescreen, emotionally complex body of songs exploring sexuality, obsession and the myriad conflicting undercurrents of city life. After coming out in 2016, Jay travelled to Paris to adjust to the realities of her new identity. Living in a culture at once familiar and alien triggered an outpouring of music unlike anything she’d written before. Strength is a constant theme: most significantly the strength to define yourself on your own terms.   Emerging from the same tightknit community as L.A. Salami and Francobollo while working with close collaborators Kristofer Harris (Ghostpoet/Belle & Sebastian), Charles Watson (Slow Club) and Adam French - and with support from Huw Stephens (BBC Radio 1) and Chris Hawkins (BBC 6 Music) - 2020 is Amaroun’s for the taking.