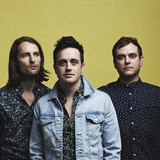 Growing from high school jam sessions to major-label record deals, Charlottesville, Virginia pop band Parachute were a grassroots effort. The childhood friends honed their mix of rock, funk, and contemporary blue-eyed soul over the course of albums on several different major labels throughout the late 2000s and early 2010s, as well as a self-titled, self-released album in 2019. In 2006, childhood friends Will Anderson (vocals, guitar), Johnny Stubblefield (drums), Christopher "Kit" French (saxophone, keyboards), Alex Hargrave (bass), and Nate McFarland (guitar), began the band Sparky's Flaw while they were all still in high school. The band generated a healthy buzz around town and eventually became popular at the nearby University of Virginia, where they opened for Robert Randolph. After gaining more popularity with an independently released EP, 2005's One Small Step, the band partnered with Red Light Management and later signed with Smash Records, an imprint of the recently revived Mercury Records. Before entering their final year at the University of Virginia, Sparky's Flaw released a self-titled EP in August 2007 and began laying the groundwork for a full-length album. Several months later, the band adopted a new name -- Parachute -- and contributed a song to the national TV campaign for Nivea. Losing Sleep appeared in May 2009 on Island/Def Jam, marking Parachute's major-label debut and peaking at number 40 on the Billboard charts. The band opened for Kelly Clarkson that fall and appeared on the Internet broadcast Live at Daryl's House with Daryl Hall. More touring took place the following year, including additional dates with Clarkson and a headlining run with British songwriter Joe Brooks. Parachute began including newer songs in their set lists and eventually returned to the studio to record their sophomore effort, 2011's The Way It Was. Their third LP, 2013's Overnight, was released on Mercury and pushed the band further into the pop realm; it subsequently became their highest-charting effort, reaching number 15 on Billboard's Top 200. Prior to the band's next album, bassist Hargrave and guitarist McFarland departed, slimming Parachute down to a trio. The remaining members worked with longtime producer John Fields to complete sessions for their fourth LP, Wide Awake, which was released in early 2016 on the Vanguard label. The band toured throughout 2017 and regrouped in 2019 for the release of their fifth album, this time simply titled Parachute. The album was self-released by the band in May of that year after a string of singles teased its best songs. ~ Andrew Leahey, Rovi