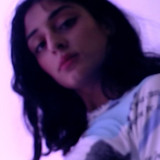 Sofie Fatouretchi is a Vienna-based songwriter, classically trained musician, DJ, and curator, among other creative roles. She's hosted programs on NTS Radio and East Village Radio, and was a creative director at global music streaming network Boiler Room. She's also had a long-standing relationship with Los Angeles-based Stones Throw Records -- she worked for the label for several years, compiled the 2016 album Sofie's SOS Tape, and performed strings on releases by NxWorries and Mndsgn, before making her full-length debut with 2020's Cult Survivor, a dreamy, reflective collection of songs written about her personal experiences. Sofie was born in Palo Alto, California to Iranian and Austrian parents. She learned to play the violin and viola when she was four years old, and later taught herself the piano. She spent parts of her childhood in Seattle and Vienna, and relocated to Los Angeles, where she interned at Stones Throw Records, who eventually hired her. She started to DJ at a Stones Throw-hosted event called 56, and she organized the first West Coast broadcast by the London-based Boiler Room network, in which she spun alongside label mainstays Dâm-Funk, J Rocc, and founder Peanut Butter Wolf. Sofie then became an integral part of the Boiler Room team, active as a programmer and creative director. In 2014, she began a monthly program titled SOS Radio on London-based online station NTS Radio. Continuing her association with Stones Throw, she helped them sign artists such as Knxwledge and Stimulator Jones, and she compiled the 2016 double-LP Sofie's SOS Tape, which included two tracks she recorded with Mndsgn. After returning to Vienna, she started a show called Sofie's Tapes on Austrian Public Radio, and she began writing songs about her heartache and anxiety. Drawing from influences such as Gary Wilson, Todd Rundgren, and Serge Gainsbourg, Sofie's debut full-length, Cult Survivor, appeared on Stones Throw in 2020. ~ Paul Simpson, Rovi