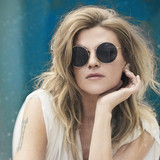 Known for her dusky, delicately nuanced vocal style, Melody Gardot has built a loyal fan base with her intimate blend of jazz, Latin, and Brazilian sounds. Persevering after suffering a life-threatening bicycle accident early in her career, she emerged to acclaim with 2007's Worrisome Heart and 2009's My One and Only Thrill, drawing comparisons to Joni Mitchell, Laura Nyro, Nina Simone, and others. Gardot has five Top Ten Billboard Traditional Jazz Albums to her name, including two number ones with 2012's Heitor Pereira-produced The Absence and 2015's Larry Klein-produced Currency of Man. She has continued to hone her enigmatic persona, exploring her own torchy originals as well as widescreen readings of standards, as on 2020's Sunset in the Blue. Gardot was born in 1985 in New Jersey to a single mother who worked as a photographer. Her mother struggled to make ends meet and Gardot spent much of her youth living in Philadelphia with her Polish immigrant grandmother. She began taking piano lessons at age nine and by 16 was already performing at local nightclubs, singing a mix of jazz, pop, and rock cover songs. At 19 years old, while studying fashion at the Community College of Philadelphia, she was riding her bike when she was struck by an SUV that had made an illegal turn. For a year, Gardot was confined to her hospital bed and underwent physical therapy. Her injuries left her with increased sensitivity to light and sound, and as a result she gravitated towards softer music, including bossa nova, jazz, French chanson, and folk music. Spending much of her time on her back, she also learned how to play guitar and began writing songs as part of her therapy. Some of these songs would become the basis for her debut EP, 2005's Some Lessons: The Bedroom Sessions, which garnered radio play in Philadelphia. Upon her release from intensive care, Gardot began pursuing her career in earnest, even as she experienced lasting physical trauma from her accident. Hypersensitive to light and noise, she began wearing dark glasses, a style that has remained part of her trademark look. For several years, she also toured accompanied by a physiotherapist and performed wearing a Transcutaneous Electro-Nerve Stimulator (or TENS device) to assist in alleviating her neuralgic muscle pain. Despite these hurdles, she recorded her full-length debut, Worrisome Heart, released on Verve in 2007. Well received, the album peaked at number two on Billboard's Traditional Jazz Albums chart. In 2009, Gardot returned with her Verve follow-up, My One and Only Thrill. The album featured production by Larry Klein with arrangements by Vince Mendoza, both of whom were well known for their work with Joni Mitchell and other legendary jazz and pop artists. The album peaked at number two on the Billboard Traditional Jazz Albums chart. She returned in 2012 with her third studio long-player, The Absence. Produced by guitarist/composer Heitor Pereira, it found her further embracing Brazilian-, Spanish-, and African-influenced sounds, including samba, tango, bossa nova, and calypso. The effort continued her upward trajectory, landing in the Top 30 on the Billboard 200 and reaching the top of the U.S. Jazz Albums chart. With 2015's Currency of Man, Gardot further expanded her musical direction, re-teaming with Klein for a set of all-original, socially conscious songs influenced by R&B, blues, and jazz. A full-length concert album, Live in Europe, arrived in 2018 and captured the singer in a series of shows recorded between 2012 and 2016. In 2020, she again paired with Klein for Sunset in the Blue, which also featured contributions by studio legends Mendoza and engineer Al Schmitt. ~ Matt Collar, Rovi