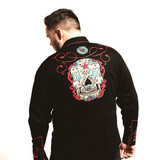 The sound that once took the nation by storm has not lost its way. Wyatt Lowe & the Mayhem Kings have taken the torch that was late 60s and early 70s rock & blues and have presented a new era of rock music fueled by love for classics that came before them, and passion for music. From touring the country multiple times, numerous amounts of press coverage, extended radio play, and three albums later, to musicianship and talent that could cover the genre twice over, the Mayhem Kings have solidified themselves a rightful spot in today’s revival on rock music clearly making it known they are here to stay. With potent and powerful chops, Wyatt leads an all-star studded group of musicians that are paving a new road for this generation and those to come.