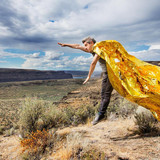 Mike Gordon is a bass guitar player and vocalist most recognized as a founding member and bassist for the band Phish. Born in Sudbury, MA, in 1965, Gordon formed his first band in high school. In 1983, while attending the University of Vermont, he formed the band @Phish along with guitarist Trey Anastasio. 34 years later, the band is still touring. He released his debut solo album, Inside In, in 2003. @Green Sparrow followed in 2008, @Moss in 2010, @Overstep in 2014 and @OGOGO in 2017. In 2002, Gordon recorded the critically acclaimed Clone album with acoustic guitar master Leo Kottke. The duo reunited in 2005 for Sixty Six Steps, followed by a supporting tour. He currently lives in Vermont.