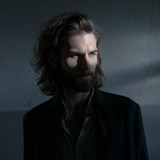 Daniel Spaleniak is a singer-songwriter/composer from Poland. So far he published 4 albums. His first album Dreamers turned into a breakthrough that would bring him to the attention of the alternative scene in Poland. He followed this up with Back Home in 2016, a record that further cemented the artist's vision. Recently he published two new albums, „Life is somewhere else” in 2018 (which he was nominated for the biggest polish music award „Fryderyk” in category blues) and „Burning Sea” in 2019 containing his work as a film score composer. He played on the biggest Polish festivals such as Opener, Off Festival, Soundrive Fest. His voice is deep and low, which makes a perfect match to his music - very emotional, ethereal, blues-folk songs bordering on onirism. His work has been picked up for shows including Netflix hit Ozark, Hulu’s The Path, CBS Elementary, TNT’s Good behavior, and many others. He was feature also with Seattle KEXP, which have all helped to export his music outside of Poland.