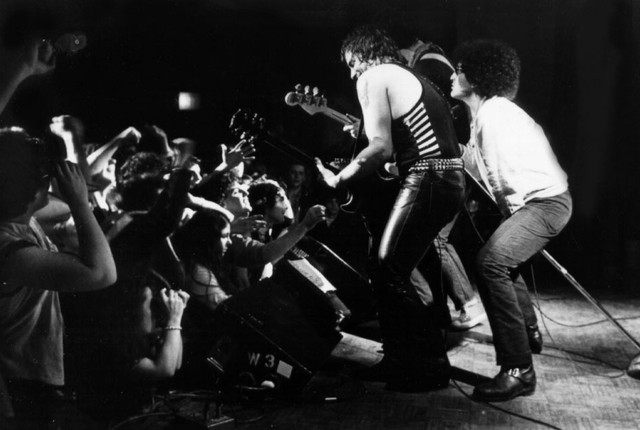 Formed in 1973, N.Y.C.'s Dictators were one of the finest and most influential proto-punk bands to walk the earth. Alternately reveling in and satirizing the wanton excesses of a rock & roll lifestyle and lowbrow culture (e.g., wrestling, TV, fast food), with their world-view defined by bassist/keyboardist and former fanzine publisher (Teenage Wasteland Gazette) Andy (occasionally Adny) Shernoff and renegade rock critic/theorist Richard Meltzer, the Dictators played loud, fast rock & roll fueled by a love of '60s American garage rock, British Invasion pop, and the sonic onslaught of the Who. Driven by the guitar barrage of Scott "Top Ten" Kempner and Ross "the Boss" Funichello and fronted by indefatigable ex-roadie Handsome Dick Manitoba (aka Richard Blum), it seemed that nothing stood in the way of the Dictators and mega-popularity. But that's not what happened. There were complications with record companies (Epic dropped them after their first album, 1975's The Dictators Go Girl Crazy!, and Elektra had little idea of what to do with 1977's Manifest Destiny and 1978's Bloodbrothers), personnel changes, radio hated them, critical response was wildly mixed, and lots of audiences didn't get the jokes; supporters remained loyal and vociferous but it didn't turn into anything tangible. They did manage to release three fine albums, but after 1978's Bloodbrothers, their strongest fusion of hard rock muscle and punky snark, was greeted with public apathy, the group's members began moving in different directions. Kempner put together the fine roots rock band the Del-Lords and the Little Kings, which paired him with New York rock legend Dion, and he recorded as a solo act. Ross the Boss spent a few years in the over the top, macho heavy metal band Manowar and later joined Shernoff and Manitoba in the punk/metal combo Manitoba's Wild Kingdom. Shernoff also formed the band Master Plan and worked as a producer. However, as Shernoff put it, "The Dictators never broke up. Sure there were occasional gaps of a few years between some shows (we had lives to lead) but deep in our hearts and souls we always knew we were Dictators. We couldn't escape it even when we tried." With this in mind, the band members got together to play a handful of shows in 1980, one of which was recorded for the cassette-only album Fuck 'Em If They Can't Take a Joke, which was later reissued as New York, New York. The band hit the road again in 1991, and began heading out on a semi-regular basis after that. In 2001, the Dictators made their abandoned retirement official and recorded a new album, D.F.F.D., which ranked with the band's finest work in the studio. More touring followed, and a live album recorded at two shows in support of D.F.F.D., Viva Dictators!, came out in 2005. The Dictators continued to launch occasional tours (most notably in Spain, where they'd gained an especially loyal following), but as Shernoff and Kempner devoted more time to their solo careers, the Dictators splintered, Meanwhile, before 2015 was out, The Dictators Go Girl Crazy! received an expanded and remastered reissue, featuring several unreleased selections and new remixes of two tunes by Andrew W.K.