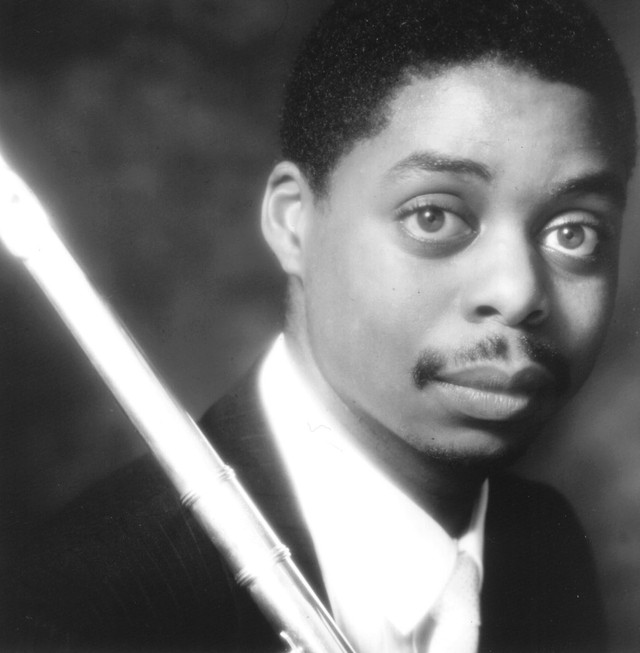 Courtney Pine is perhaps the most enigmatic of late 20th century British jazzmen; he has consistently fascinated and frustrated critics with a restless and adventurous musical vision that has brought world music, pop, reggae, electronica, funk, and soul to sit in with the jazz tradition on his recordings. Born in March 1964, Pine spent his youth in London, learning to play multiple instruments, including saxophone (he is proficient on tenor, soprano, and baritone), clarinet, flute, and a host of keyboard instruments. He cut his jazz teeth with the hard-bopping Dwarf Steps, before leaving to tour and record with reggae stars General Saint and Clint Eastwood. Pine went back to the jazz root, studying Sonny Rollins' and John Coltrane's improvising styles while participating in drummer John Stevens' jazz workshops before he became a part-time member of the Charlie Watts Orchestra. Pine left to tour with both George Russell and Art Blakey's Jazz Messengers before recording his debut album, Journey to the Urge Within, for Antilles. That disc propelled Pine into the public consciousness with its U.K. Top Ten smash "Children of the Ghetto," while the album won a Silver Disc award. It was also reviewed favorably in the U.S., played on jazz and adult Quiet Storm radio, and sold quite respectably. Pine remained with Antilles through 1992, issuing four more albums with the label, 1987's Destiny's Song + the Image of Pursuance, 1989's The Vision's Tale, Within the Realms of Our Dreams in 1990, and his first reggae outing, Closer to Home, in 1992. Throughout the early '90s Pine also guested with U.K. soul chanteuse Mica Paris. Also during 1992, Pine signed with the 4th & Broadway label and issued the revolutionary To the Eyes of Creation, which fully engaged his myriad interests in African and East and West Indian musics and melded them with jazz improvisation. Eyes of Creation, Pine's live album, was released by Island in 1995, just prior to his signing with Verve. While with Verve, Pine issued his first complete jazz outing in Modern Day Jazz Stories, recorded with an American band that included Geri Allen, Mark Whitfield, Eddie Henderson, and Charnett Moffett, and featured vocals by Cassandra Wilson and the Angelic Voices of Faith. Jazz purists were almost delighted, and hoped Pine would now stay put in the bosom of tradition so they could laud him as the new Coltrane. Pine frustrated them by employing hip-hop turntablism on 1997's Underground, which included drum and soundscape programming alongside DJs and a band that included Jeff Watts, Whitfield, Reggie Veal, Nicholas Payton, and Cyrus Chestnut. Pine pulled another rabbit out of the hat for 1998's Another Story, issued by Talkin' Loud, wherein he invited a host of electronica's finest DJs -- Roni Size and Attica Blues among them -- to remix tracks from Modern Day Jazz Stories and Underground as drum'n'bass crossovers. It was his last record of the 20th century. Pine was appointed an Officer of the British Empire (OBE) in 2000, and released another award-winner with Back in the Day that year. The album was a tribute to the funky soul-jazz and Afro-funk sounds of Gary Bartz, Fela Kuti, Manu Dibango, Eddie Harris, Idris Muhammad, and Bernard Purdie, all of whom were parts of his musical development in the '70s. His all-British band was augmented by guests and DJ Pogo. It was his first recording not to be simultaneously released in the United States. Pine scored the two-part BBC documentary Nelson Mandela: The Living Legend, which aired in 2003, and released Devotion at the end of the year in Great Britain and in July 2004 on the Telarc label in the U.S. Once more Pine nailed together disparate harmonic, rhythmic, and dynamic elements from Africa, the Caribbean, jazz, soul, and Indian musics, taking his adventurous discourse into new and previously uncharted territory. Later that year, he followed up with the sublime large-ensemble jazz-funk set Resistance: The Awakening Process on Destin-E and was awarded an honorary doctorate from the University of Westminster. He also hosted the a long-running radio program for BBC Radio 2 called Jazz Crusade. He dedicated himself to public education in music, teaching and organizing workshops all over the U.K.

In 2009, he was appointed Commander of the Order of the British Empire (CBE) and received the prestigious New Year Honours for services to jazz music that same year. In 2010, he was awarded an honorary doctorate from the University of Southampton, and released Transition in Tradition (En Homage a Sidney Bechet), which showcased his talents on the bass clarinet, playing not only reinventions of classic New Orleans music, but also paying tribute to the jazz tradition of Great Britain by way of the Caribbean diaspora with the tracks "The Tale of Joe Harriott" and "Toussaint l'Overture." Pine shored up his commitment to bass clarinet on 2011's forward-looking Europa. His band for the date included pianist Zoe Rahman, bassist Alec Dankworth, and drummers Mark Mondesir and Robert Fordjour. The following year, Pine used his soprano exclusively on House of Legends, an album of merengue, ska, mento, and calypso for which picked a band steeped in Afro-Caribbean music: French/Martinique pianist Mario Canonge, Trinidadian steel-pan player Annise Hadeed, trumpeter Eddie "Tan Tan" Thornton, and Jazz Jamaica drummer Rod Youngs. Pine toured and continued teaching and mentoring. He surfaced on record again in 2015 with Song (The Ballad Book) a duo album of his bass clarinet paired with Rahman's piano in a program steeped in classic set pieces such as "Amazing Grace" and "A Nightingale Sang in Berkeley Square," with contemporary soul tunes such as Chaka Khan's "Through the Fire" and Donny Hathaway's "Someday We’ll All Be Free," as well as modernist jazz classics such as Sam Rivers' "Beatrice." Pine left Destine-E for the Freestyle Records label and 2017's Black Notes from the Deep, which featured another British music icon of equal repute, Omar Lye-Fook M.B.E., on four cuts, including the set's first single, a cover of Herbie Hancock's "Butterfly." Dankworth returned on bass with Youngs on drums along with new pianist Robert Mitchell. Veteran organist Ed Bentley guested on "In Another Time," while guitarist Chris Cobbson added his playing to "The Morning After the Night Before." After "Butterfly" ran up the British jazz charts in August and September, the album was released in late October. ~ Thom Jurek, Rovi