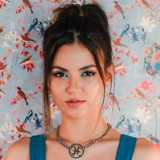 Actress and singer Victoria Justice is best known for starring in the 2010's Nickelodeon show Victorious. Along with regular film and television work, including singing on the Victorious soundtracks, she has released her own music, including 2013's "Gold" and 2020's Treat Myself." Born in 1993 in Hollywood, Florida, Justice started acting at age ten, earning guest spots on shows like Gilmore Girls and The Suite Life of Zack and Cody. These appearances led to a regular role on the Nickelodeon teen comedy-drama Zoey 101, which ran from 2005-2008. In the meantime, she also found parts in films such as 2005's When Do We Eat? and 2006's The Garden. She also released a 2007 cover version of Vanessa Carlton's song "A Thousand Miles." In 2010, at the age of 17, Justice took on the lead role of singer Tori Vega on Victorious, a Nickelodeon sitcom set in a fictional performing arts school in Hollywood, California. During its four-season run, Justice's singing performances appeared on the soundtrack collections, beginning with 2011's Victorious: Music from the Hit TV Show. The album hit number one on the soundtracks chart and number five on the Billboard 200, paving the way for 2012's Victorious 2.0 and Victorious 3.0. In 2013, Justice released her first solo single, "Gold," on Columbia Records. She also took the lead role on the MTV crime drama Eye Candy, which aired for one season in 2015. That led to more film and television work and a renewed focus on acting, though her voice would soon be front and center due to her being cast as Janet in the 2016 Fox TV "reimagining" of the musical The Rocky Horror Picture Show. Following roles in the films The Outcasts, Bigger, and Summer Night, Justice returned to music, releasing the 2020 song "Treat Myself." ~ Marcy Donelson