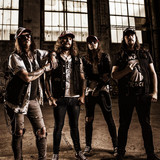 High energy action punk, straight out of the gutters of Gothenburg, Sweden! Scumbag Millionaire is an extension of the classic Scandirock scene which had its prime in the late ‘90s with bands like The Hellacopters and Turbonegro. With people craving new Scandirock acts, Scumbag Millionaire are more than happy to pick up where it left off, proudly flying the Scandirock flag in 2020. September 25th 2020 will see the release of Scumbag Millionaire’s second album: Poor And Infamous. The follow-up to debut album Speed (2018) was recorded at the legendary Sunlight Studio in Stockholm, produced by Tomas Skogsberg (Backyard Babies, The Hellacopters, Peter Pan Speedrock) and mastered by Frida Claeson Johansson at Svenska Grammofonstudion, with guest vocals by Jennifer Israelsson (Hot Breath) and Elin Larsson (Blues Pills). In a little under six years, the band has released between 17 and 20 singles (they might have lost count), including split releases with bands like Electric Frankenstein and an Iggy & the Stooges tribute split 7”. To end their Speed album cycle with a bang, they released a 12” maxi single. Between their unbeatable live energy, their trashy but classy music videos and their impressive list of vinyl releases that look as good as they sound, these Swedish guys set the bar high, flying the flag for Scandirock in 2020.