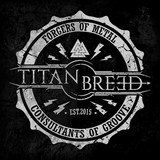 Born and bred in Glasgow, Scotland, Titan Breed combine elements from all areas of the metal genre and have been carving a destructive path ever since their live performance debut in April 2016 at The Garage, one of Glasgow’s most iconic music venues. In April 2017 the band released their debut studio E.P. ‘Edge Of The World’, five original tracks including live staples ‘Descend in Isolation’ and ‘Everytime’. Later that year Titan Breed were crowed winners of the renowned Metal 2 The Masses competition, resulting in a celebrated festival debut at Bloodstock Open Air in August of 2017. The band have since completed their first ever UK tour - opening for fellow Scotland based metal/hiphop band Neshiima - as well as landing support slots with some major players in the metal scene, including the opportunity to open for metal legends Obituary (2018) and Alien Weaponry (2019). In turn Titan Breed have gained notoriety for their tight sound and hard hitting live stage presence, anchored by the magnetic Johnny Malice who brings Glasgow’s own brand of metal front-man ferocity to the stage. Titan Breed used the remainder of 2019 to finish writing and recording their second studio E.P. As a result, the ‘Legacy’ E.P. will be released on the 14th February 2020. This five track release features all new material, including; ‘We Bring Destruction’, ‘The Key to Fear’, ‘A Change of Fate’, ‘Destined to Fail’ and title track ‘Legacy’.