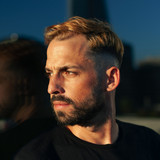 "Pablo Nouvelle brings soul back to the future" -The Guardian Pablo Nouvelle gained international attention first in 2012 with his self-released and self-titled album described as „essential“ by Mixmag, followed by the Ep YOU DON'T UNDERSTAND on UK’s tastemaker label Black Butter. With his first official album All I Need (2016), Nouvelle and his band started touring Europe playing more than 150 shows in 11 countries. In 2018, Nouvelle released the follow-up album Wired (2018) featuring UK soul singer Andreya Triana, among others. 2019 saw the release of Piano Pieces, a collection of raw & honest piano compositions and the mini Album Atlas Internet Cafe. An instrumental lo-fi homage to Seven Sisters in London. Then he released Eliso & Milambi. 4 Songs based on Tanzanian samples from the 50s featuring the iconic Angelique Kidjo. Since April 2020 his new Album Obsolete is available. An upbeat instrumental record: Colorful, warm, dirty & playful. Music to dance and dream to. Pablo Nouvelle is an in-demand remixer and producer who has worked with the likes of Jessie Reyez, Anne-Marie, Bruno Major & Josef Salvat - stepping up for remix duties for AURORA, Gorgon City & MARINA and the Diamonds. "A perfect blend of electronic and soul music, full of emotion, warmth and life." -Complex UK When Nouvelle isn’t pursuing music, he is an acclaimed animation filmmaker with 3 award-winning short films to his name. 'In A Nutshell’ his latest, was longlisted for an Oscar®.