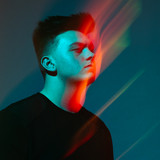 Indie synth wave collective Saint Mars is made up of talented musicians across UK, US and Switzerland, including lead singer and young viral sensation Tryzdin, founding members Marc Darcange and Angelo Bruschini (Massive Attack guitarist), bassist/keyboardist Julius Conrad, as well as special guests: rapper Jethro "Alonestar" Sheeran, Brent Paschke (N.E.R.D., Pharrell Williams) and Robert Brian (Siouxsie, Goldfrapp, Simple Minds). Saint Mars’ music has been featured on CLASH, Music Week, Wonderland Mag and Medium. Saint Mars are known for their strong anti-bullying stance, actively voicing their opinions about the harm that it can cause. The single ‘Ocean Blues’ can be considered the foundation stone for this public stand, having originally been inspired by a documentary on a French schoolboy bullying that resulted in suicide. The song gained great consideration with three remixes by Droid Bishop, Juche and Lost Years, earning them a number one on Submithub and features on YouTube tastemakers channels NewRetroWave and FOMH. Saint Mars are returning on October 29, 2021 with their new single ‘The Last Dream Ever Made’, a synth wave anthem revealing one of their most intimate journeys into overcoming bullying and associated mental health issues, as illustrated by the fragility of the opening breaking glass and the heartfullness of the soaring chorus: « Through the fog that grows thicker every day - Take your first leap of faith for the last dream ever made ».