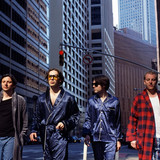 Based in Birmingham, England, Peace create drifting, melodic indie rock that merges the crawling atmosphere of classic post-punk with the pop-oriented bounce of modern bands like Vampire Weekend and the Maccabees. Formed by brothers Harrison and Samuel Koisser on vocals/guitar and bass, respectively, as well as guitarist Douglas Castle and drummer Dominic Boyce, the band came together under the name Peace in 2010 before gaining recognition among the U.K. press with its debut outing, the Delicious EP, which was released on Columbia in 2012. A full-length effort, In Love, followed in early 2013. The Jim Abbiss-produced record was well-received, reaching the Top 20 of the U.K. charts, and the quartet set out on a U.K. tour later that year. In 2014, they confirmed that work had started on their sophomore album -- with the lead single, "Money," airing on the radio midway through the year -- and Peace also supported the Libertines at Alexandra Palace for their reunion show. The band again worked with Abbiss on Happy People, which appeared in 2015, further emphasizing their post-Brit-pop leanings and reaching number 12 on the U.K. pop charts. Three years later, in April 2018, Peace delivered their follow-up LP, Kindness Is the New Rock and Roll. The album was written in a National Trust property in Hertfordshire and produced by Simone Felice (the Lumineers, Bat for Lashes). ~ Gregory Heaney & Scott Kerr, Rovi