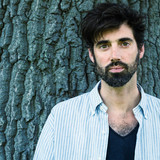 Ruben Hein is a celebrated pop artist, composer, presenter and orchestra leader. He has been the conductor of the National Youth Jazz Orchestra (NJJO) and has four studio records to his name: Loose Fit (2010), Hopscotch (2013), Dressed Up (2014) and Groundwork Rising (2018). He released a live album with the world- famous Metropole Orchestra in 2011. He was also a member of the well-known British indie formation Fink. For his latest project, Ruben reconciles his two greatest fascinations: music and nature. In early 2020, just before the pandemic broke out, Ruben found himself on a boat at the South Pole, surrounded by endless ocean waves, penguin colonies, whales and abandoned settlements. During this enrapturing Artist In Residency he captured the first ideas for his upcoming project in the hub of expedition vessel Hondius. This unique adventure in Ruben’s artistic pursuit was documented in an upcoming film directed by Hubert Neufeld. "A storm here is like free jazz or a rock concert. The icebergs are like cellos, double basses, deep synths. The life I’ve seen on this trip is a joyful piano bar. Nature and music give me a sense of direction and purpose. There’s a clear goal in learning and discovering more about them. And that curiosity is like an elixir to me. It’s mine… and I’ll always have it, no matter what happens.” - Ruben Hein