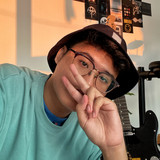 Nicholas Yoel, born on the 8th of February 2000, is an indie pop singer-songwriter and music producer based in Indonesia. Born in Bandung and been playing music since 6 years old, surely he is a multi-instrumental musician. By having knowledge and skills in music production, he records and produces all music in his own recording studio, named NYS Rooftop Studio. He made his debut in 2020 by releasing two EP : A Dreamless Dream, Society. Not only that, he also released his first album : Fairytale in 2020. Then, he released Akari, a 90's J-Pop single in 2021. In mid 2021, he released Easily, a soft-rock single and also Emily, a brit-pop single. In his teenage life, Nicholas Yoel was influenced by music from Coldplay, Maroon 5, and John Mayer. But Lately, he become a fan of boy pablo. Nicholas Yoel loves to learn and discover many genres from any of era and mix some of them into a new fresh and unique music. Some of the stories of songs that he has made are based on his experience. Mostly, he talks about the love-life of teenager. By getting broken heart many times, he makes his sad stories to become sad songs. But of course, not all the songs he created have a pathetic lyrics. He created some groovy and danceable tracks as well. Make sure to keep updated on Nicholas Yoel's next project. Enjoy !!!