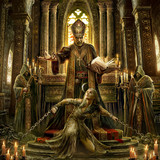 On 29 May 2020 Lamenting Of The Innocent was released and exceeded all expectations. It hit the official album charts in 4 different countries (#18 spot in Germany) and was rewarded ’Album of the Month’ in magazines Deaf Forever and RockHard. The unexptected downtime due to COVID-19 threw a spanner in the band’s touring plans and bookings for Sweden Rock, RockHard Festival and Pounding Metal Fest Spain were postponed to summer 2021. To stay connected with the fans in these unusual times, SORCERER broadcasted their Album Release Party during a 2 hour livestream. Highlight of the event was unmistakably the acoustic live set. For the occasion the band performed rearranged versions of the new songs Condemned and Deliverance and their classic Prayers For A King. Recordings of this concert were released as the digital EP SORCERER – The Quarantine Sessions in September 2020. Today, SORCERER stands tall: over 30 years into a career that has seen them evolve from humble nordic underground musicians to their current status as band with their own original signature sound and three acclaimed albums to their credit. The band is very much looking forward to return to action again with their biggest, most passionate and bombastic musical statement to date!