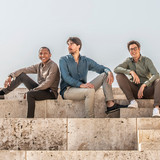 „The new faces of German Jazz“ This is how the German magazine stern referred to triosence, the trio formed in 1999 by Bernhard Schüler (piano), Omar Rodriguez Calvo (bass) and Tobias Schulte (drums). Since their debut album, “First Enchantment”, released in 2002, triosence has been praised by the music press all around the world. The trio has been acclaimed as one of the most successful jazz imports and as “the piano trio that changed our impression of the ‘stiff German jazz’.” ¹

triosence has performed all over the world, with tours in Germany, the United States, Brazil, Japan, Taiwan, Malaysia, France, Spain, Norway, The Netherlands, Turkey, Lebanon, Romania, Albania and many more. Over the years they have created their own fresh and unique style from a combination of Jazz, Fusion, Folk and World Music. Because they emphasize melody and focus on the essence of the song as their trademark, the trio has labeled their music songjazz. The name, triosence (neologism derived from trio-essence) refers to the approach of equality of instruments. The result is music that connects with a variety of audiences, from pure jazz fans to those who haven’t found themselves among jazz listeners before. 1) Swing Journal Japan