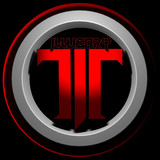 • The band was originally founded in Moschato Greece back in 1992. First name was “Ivory Tower”. Constant rehearsing, composing and huge amount of live gigs. Come June 2008, the sextet is opening for legendary Blue Oyster Cult. • “The Ivory Tower” (mixed and mastered in Germany, Mystic Studios and R.D. Liapakis and Christian Schmid) was released in May 2013 via “The Leaders Records” in Europe and the rest of the world. The Japanese edition hit the Land of the Rising Sun in August 2013 (special artwork featuring the OBI). • The band managed to attract the attention of German label 7hard/7us media group, the contract were signed and the sophomore album, entitled “Polysyllabic” was released in November 2016. Recorded at their own studio – the iCave by Dee “K.man” Theodorou. Produced by Yiannis Petroyiannis & Dee “K.man” Theodorou, mixed and mastered at the Matrix Studios Athens by Yiannis Petroyiannis. The band was selected for a concert to remember. ILLUSORY got to open for the legendary Geoff Tate, the voice of Queensryche for over thirty years and his Operation: Mindcrime saga. February 2019 and the boys played an amazing show in Athens, at a sold-out venue and confirmed they can deliver. • 2021 Featuring a brand new deal with one of the most up and coming as well as promising labels, Rockshots Records, the “Ivories” are about to hit the Heavy Metal world in 2021 with “Crimson Wreath“, with the same people participating and the same studios involved.