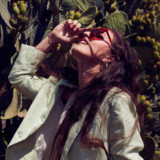 Veronica Fusaro writes authentic storytelling pop songs interweaved with powerful melodies that shimmers somewhere between retro soul and alt pop. Fusaro already impressed Dire Straits legend Mark Knopfler with her versatility, with whom she performed in the amphitheater in Nîmes. The 350 concerts she played include gigs at Glastonbury ’19 and Eurosonic ’20. Following on from her most recent single ’Beach’ and first release taken from her debut album which she’s currently working on, 2nd single ’Fool’, is a story about lies, deceit and a broken heart. The rich, classic full band production would not sound out of place on a James Bond Soundtrack. The strong vocal performance delivers the realization of true strength after being hurt. The bluesy ballad with a rocky finish showcases Fusaro's talent for being sometimes mellow, sometimes singing velvety, sometimes belting. Should Tarantino ever make a romantic drama - "Fool" would be the perfect piece for the soundtrack. Veronica Fusaro counts Adele and Lana Del Rey among her idols and has already been compared to Lorde. Her previous successes and the current single give us a hint: This young woman has what it takes to become something really big.