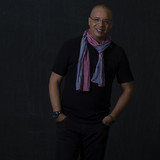 Inventive vocalist Issac Delgado was one of Cuba's most famous modern salsa musicians. His music, which combined elements of Afro-Caribbean rhythms with pop and jazz, evolved over the course of his career to include experiments with electronic elements and avant-garde sounds. Born into a theatrical and musical family in Havana, Delgado's career began in a band called Proyecto with the famed pianist and composer Gonzalo Rubalcaba, who would prove to be a powerful force in Delgado's music, providing mentorship, support, and inspiration. Delgado's next projects were Pacho Alonso's Orchestra and the Galaxia Group, where he recorded his first albums. Fame began to enter his life when he worked with N.G. La Banda, the Cuban dance group, which attracted large audiences in Europe, Japan, Latin America, and the U.S. with their lively playing and 1992 hit album, En la Calle. The album contained the number one worldbeat single of the year, "Necesito una Amiga." Simultaneously Delgado was working on his own projects. In 1991 he formed his own orchestra. His first solo album, Dando la Hora, issued by Artcolor Records, featured Rubalcaba and an unusual feature -- the first computer synchronized horn section in salsa. His follow-up with Artcolor, Con Ganas, was a commercial success, and a little closer to traditional salsa music. In 1995, Delgado was signed to the RMM record label and issued El Año Que Viene with them. The album did well and Delgado was invited to play at the New York Salsa Festival at Madison Square Garden. His second RMM release, Otra Idea (1997) was recorded in New York and featured Iván "Melón" González, arranger and songwriter Joaquín Betancourt, and Afro-Carribbean dance music artists Isidro Infante, Johnny Almendra, Papo Pepín, and Rubén Rodríguez. In 1997, he had a small independent release entitled Exclusivo para Cuba with Geminis Productions, but his contract with RMM was still in effect and they produced another album for him in 1998, Mi Primera Noche, considered to be one of Delgado's most unusual and ambitious projects yet. While he was taking chances on the artistic front, Delgado also found himself in trouble on the political front. An otherwise uneventful concert in Miami got Delgado, a Cuban national, in trouble with the INS because he had indicated on his visa application that he was playing in a music festival in Massachusetts, not a club in Little Havana. No arrests were made, but the U.S. Government made threats of complicating and limiting Delgado's future entrance into the U.S.. Regardless of his future ability to perform in the U.S., his popularity as a recorded artist continued, and RMM released a greatest-hits album for him in early 2000, Los Grandes Exitos de Isaac Delgado. Formula followed later that December. His subsequent releases included Versos en el Cielo (2002), Prohibido (2005), En Primera Plana (2007), and L-O-V-E (2010). ~ Stacia Proefrock, Rovi