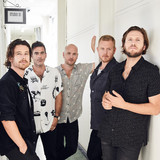 '(Boy & Bear) bring their '70s inspired pop-folk vibes, combining lead vocalist Dave Hosking's signature glorious vocals with bass lines full of attitude along with cinematic melodies that resonate throughout any venue' - LeftLion UK. The Sydney 5-piece first garnered attention when they uploaded their song The Storm to triple j Unearthed in 2009. Their debut album Moonfire (2011) reached double-platinum sales, won five ARIA Awards and three songs in the triple j Hottest 100. Their sophomore album Harlequin Dream (2013) achieved platinum sales and the #1 spot on the ARIA Album chart staying in the top ten for five weeks. They followed up with Limit Of Love (2015), resulting in their second ARIA #1 album debut. After touring the world multiple times, the band became Splendour In The Grass favourites, performed on Conan O'Brien, and sold out two Sydney Opera Houses. This iconic Australian band returned with their triumphant release, Suck On Light, in 2019. In 2020 they released At Golden Retriever Studio, a series of stunningly stripped-back versions of some of the most loved songs of their career. Boy & Bear's trademark live performance warmth and charisma was experienced by over 65,000 people this Australian summer. Crowds grinned from ear to ear as they joined forces to sway together, sing their hearts out and reminisce on their fondest memories. Having now wrapped their tour, the band return to the studio to create music for expected release next year.Gang of Youths