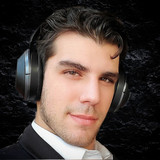 Born September 22nd, 1997 in Venezuela (Maracay, Aragua), Daniel Gonzalez has had an affinity for music since his early childhood. At the age of just 5 years old, he became infatuated with Piano and has not stopped playing since. This aided Daniel in branching off into a variety of genres. These include an array of sounds from categories like Electro, Hip Hop, Rap, EDM General, Lounge, World Music and Soundtrack (predominantly video game and movie style.) Daniel expresses a plethora of emotion through his music, conveying his deepest parts of life. The sounds he shares are of wonders and experience. He has found a way to persevere and succeed in both life and music. As he continues to grow, his music grows with him.